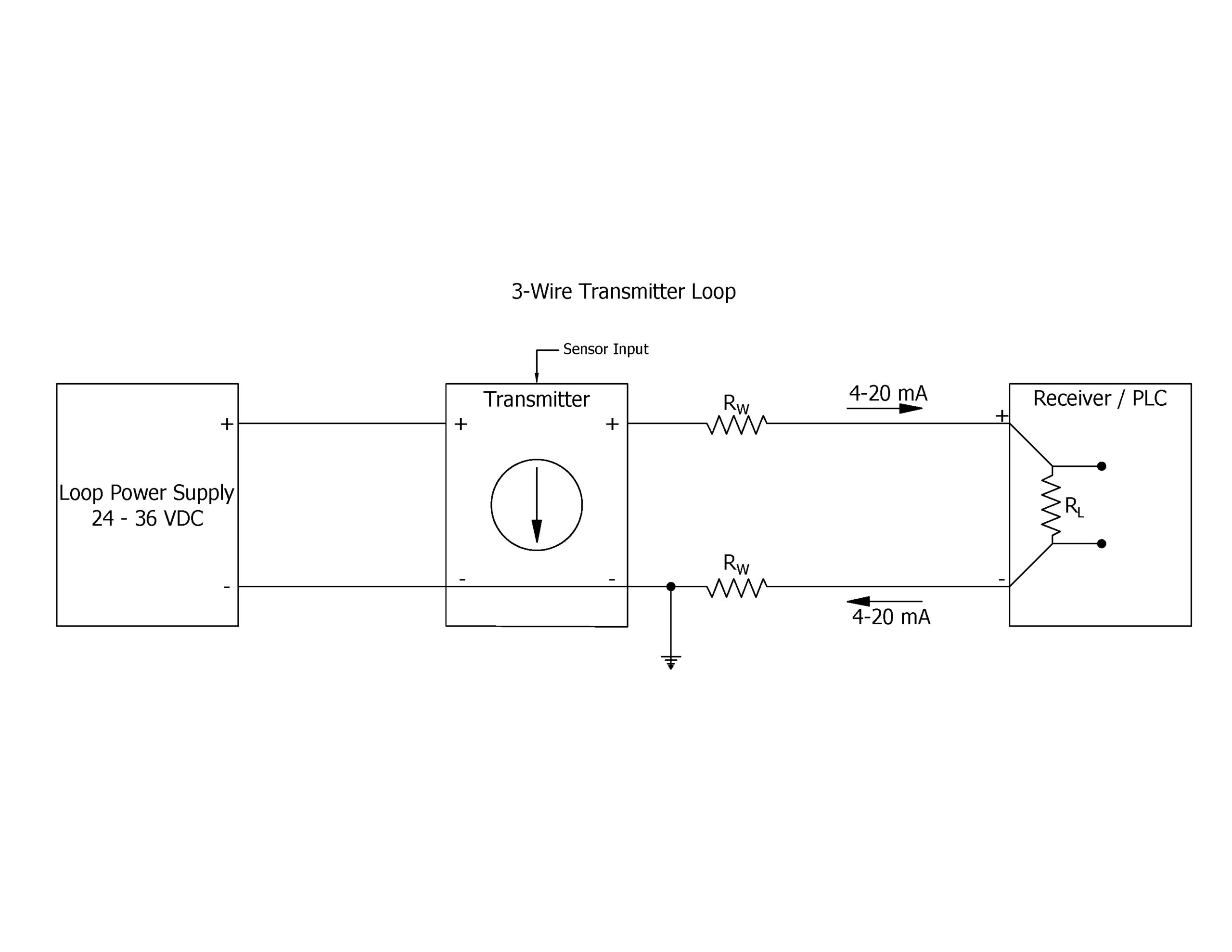 By John Matlack, VP of Sales and Marketing, Alliance Sensors

A 4-20mA current loop has become the standard for signal transmission and electronic control in most analogue control systems; see Figure 1 – for analogue sensor data transmission, it is a very common method to convey the sensor data acquired.

In a 4-20mA current loop, current is drawn from a DC loop power supply, then flows through the transmitter using field wiring connected to a loop load resistor in the receiver or controller, and then back to the loop supply, with all elements being connected in a series circuit. All current-loop-based measuring systems use at least these four elements.

Advantages of a current loop

When current is transmitted in the loop, there are voltage drops due to the field wiring conductors and any connected devices. However, these voltage drops do not affect the current in the loop as long as the total loop voltage is sufficient to maintain the maximum loop current. The element responsible for maintaining a stable current in the loop (as shown in Figure 1) is the loop DC power supply. The range of voltage over which the loop will function is its “compliance voltage”. Common values for 4-20mA loop supplies are 24 or 36VDC. The voltage chosen by a designer depends on the number of elements connected in series with the loop, because the loop power supply voltage must always be higher than the sum of all the voltage drops in the circuit, including the field wiring voltage drop. The sum of all these voltage drops is known as the loop’s minimum compliance voltage. There are certain requirements that the compliance voltage must be able to fulfill, the two most important of which are:

A sensor or transducer that measures a physical parameter, such as temperature, pressure, position, or fluid flow, is connected to a signal conditioning circuit that converts the measured parameter value to an electrical output signal such as a voltage or current proportional to the measured physical parameter. If this electrical signal is a 4-20mA DC output connected to a current loop, the hardware and electronics system that sends a current into the loop is called a transmitter. A transmitter may consist of a single device containing a sensing element and some electronics, or it may use a sensor or transducer connected to separate signal conditioning electronics configured as a 4-20mA current transmitter.

Sensors or transducers are usually designed to measure a range of values of the measured parameter, which is known as the “measurand”. The measurand value must be converted to current within the measuring device in such a way that the current in the loop will be proportional to the measurand value. The range of the loop current, 4-20mA, is called the “span of the transmitter”. The transmitter is typically configured so that one end point of the measurement value will correspond to 4mA and the other to 20mA.

Field wiring conductors are used in the loop to connect the transmitter to the process monitoring or control hardware. It is important to see them as an element of the loop because they have some resistance and produce a voltage drop, just like any other element in the loop. If the sum of all the voltage drops is higher than the loop power supply compliance voltage, the current will not be proportional to the measured parameter and the system will produce unusable data.

The distance between the sensor-transmitter combination and the process controller or readout can be several hundreds of feet or more. The resistance of the field wiring conductors is normally given in Ohms per length, typically Ohms per 1000 feet, so the total resistance is the product of this value times the length of the wires divided by 1000. Note that the wire length includes the loop conductor going out and the loop conductor for the current return, which is twice the individual conductor length. The total wiring resistance is represented by the symbol Rw, as is shown in Figure 1. The voltage drop due to the field wiring is given by Ohm’s law:

After the loop current is generated, it must usually be further processed in the system; for example, the current could be used as feedback to a valve controller to open, close, or modulate the valve in order to initiate or control a process. It is easier to perform control functions with a voltage rather than a current. The receiver is the part of the loop that converts current into voltage. In Figure 1, the receiver is a simple resistor that is in series with the loop, so from Ohm’s Law, the voltage developed across it is directly proportional to the measured physical parameter, or measurand.

It is very important that the loop load resistor power rating is sufficient to ensure that any heating caused by current flowing through it won’t change its value and thereby change the voltage developed across it. Recall that the wattage dissipated by the resistor is I² x R. For a 500-Ohm load resistor, the power dissipated at 20mA is 0.2W. A good choice for the resistor’s power rating is at least 2W because such a load will not heat up very much. Even at full loop current, there won’t be a voltage change across the load resistor due to heat from power dissipation instead of actual loop current changes. Wire-wound resistors usually have lower temperature coefficients than metallised resistors.

There are several different varieties of current transmitters used for 4-20mA current loops. In general, they conform to the following categories, delineated by the number of connections required for operation:

Two-wire loop-powered transmitters are electronic devices that can be connected in a current loop without having a separate or independent power source. They are designed to take their power from the loop current. Typical loop-powered devices include sensors, transducers, transmitters, repeaters, isolators, meters, recorders, indicators, data loggers, monitors, and many types of field instruments.

Loop-powered devices are important because for some systems it is difficult to supply separate power to all the devices and instruments in the loop. The device might be located in an enclosure where access might be difficult, or in a hazardous location (hazloc) where power cannot be allowed or must be limited.

Figure 1 shows a two-wire loop-powered device connected to a current loop. It is considered a current-sinking device. The power to drive it is supplied entirely by the unused current below 4mA in the loop. Two-wire loop powered transmitters are popular, but usually more costly than three-wire.

Three-wire transmitters are often less costly than two-wire ones. They are different from loop-powered transmitters because their loop current is developed from a DC power supply that supplies more current than just the loop current. The entire transmitter operates off this supply and may consume much more current than typical two-wire loop-powered devices. However, a three-wire system is a sourcing element, so it supplies the current loop despite what it uses itself; see Figure 3.

It is important to note that a three-wire transmitter should never be connected to any two-wire loop powered system.

Notice the high side of the power supply is not directly connected to the loop, but that the return side of the power supply is connected via a grounded point, so a three-wire transmitter requires careful consideration of grounding issues to prevent potential ground loops. If an application using a three-wire transmitter requires isolation in the loop, there are several paths to follow.

One way is to use a separate DC power supply for each three-wire loop output device, so that there is no interaction with other current loops. Another way is to use a loop isolator module. These devices use various methods to achieve galvanic isolation, typically using transformers or optical couplers. They accept a 4-20mA signal, function as a repeater or re-transmitter, and deliver a reconstituted 4-20mA current loop signal that is fully isolated. A third way is to use a four-wire transmitter which has isolation already built in.

Four-wire transmitters offer the current sourcing advantages of a three-wire device, but also provide galvanic isolation for the current loop output. Four-wire devices are substantially more expensive than three-wire devices. For this reason, they are generally used where the isolation is needed, or they are part of a combination device with an approved safety barrier for current loop operation in a specific hazardous location.

A four-wire transmitter block diagram is shown in Figure 4. A notable item is that the four-wire device itself uses a separate DC power supply for operation, just like a three-wire transmitter, and supplies loop current that way.

It is useful to conclude with a summary of the features and benefits of the 4-20mA data transmission process, as well as its limitations.