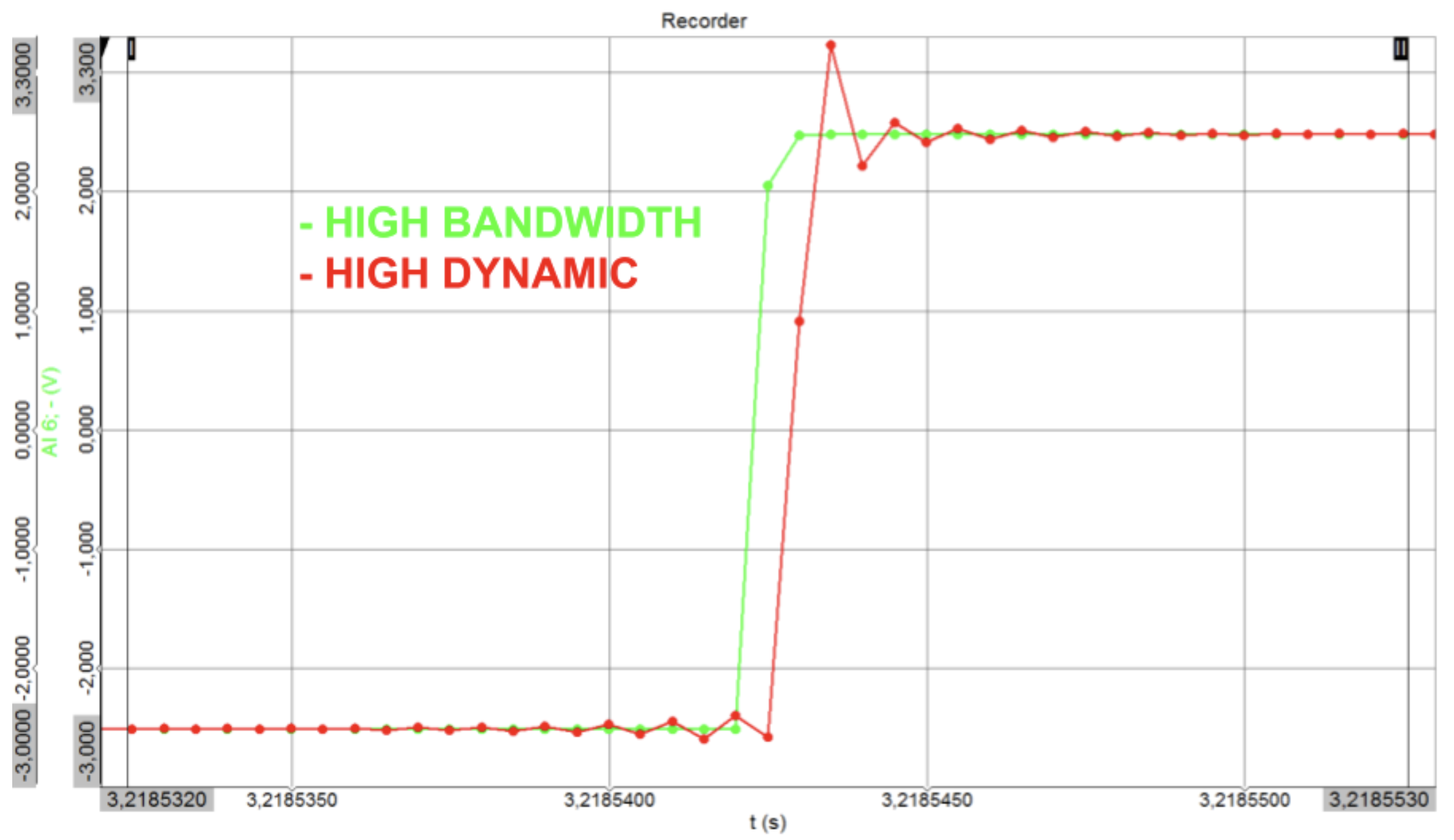 For decades now, DAQ (data acquisition) systems have been based on either delta-sigma ADCs or successive approximation (SAR) ADC types, each with its own advantages and disadvantages.

Figure 1: Direct comparison of a raw impulse signal and the ringing of a sigma-delta ADC versus the higher bandwidth (but increased noise) of an SAR ADC

Whilst delta-sigma ADCs offer a wide dynamic range, 24-bit resolution and built-in anti-aliasing capabilities, SAR ADCs offer higher bandwidth and excellent reproduction of impulse signals such as spikes and square waves. Delta-sigma ADCs were originally intended for the sinusoid-based wave shapes found in nature, as in acoustic and vibration measurements, for example. They excel at these, but can exhibit hysteresis (i.e., “overshoot” or “ringing”) when fast rising impulse signals are input.

In addition, while SARs have the advantage of higher possible sample rates and excellent handling of impulse signals, delta-sigma ADCs offer the highest possible dynamic range and built-in anti-aliasing filtering. Their dynamic range is so superior, in fact, that you will rarely see a sound or vibration system that is not based on delta-sigma technology. It should be mentioned that each bit effectively doubles the resolution of an ADC, so 24-bits is not “50% better” than 16-bits. In fact, it provides 256 times as much resolution. Consider these numbers:

A top-level comparison of SAR and delta-sigma ADC types are shown in Table 1.

Engineers choosing a DAQ system for their measurement applications have historically been forced to choose between speed and dynamic range. In a few fields of study, such as acoustics and vibration, modal analysis and similar, delta-sigma has been, and remains, the clear choice because of its dynamic range and noise performance. In other fields such as transient recording or recording impulse signals, SAR has been the only choice due to its raw speed.

The problem arises with applications that require a combination of both high-speed sampling and high dynamic range with anti-aliasing filters: which to choose? Engineers have been forced either to sacrifice one of these capabilities, or to buy two completely separate DAQ systems and operate them simultaneously. Sometimes sacrificing one of the capabilities is simply not possible, so two systems must be used, drastically increasing costs and test complexity. This complexity only increases after the tests are done, when two completely independent sets of data have to be merged, analysed and ultimately archived.

Happily, in the last few years a new type of DAQ technology has been developed that combines the best features of both SAR and delta-sigma ADC technology. Each channel can sample up to 15MS/s. When the sample rate is below 1MS/s, the resolution is better than 24-bits, providing up to 150dB of dynamic range. In addition, anti-aliasing filtering is built-in and automatic.

This new technology allows the user to select from among two modes of operation:

Even though test operators may select some channels to be high bandwidth and some to be alias-free and high dynamic range, and even select different sample rates for each channel, filtering is designed in such a way that all signals are time-aligned with each other. Preventing phase shift is an important consideration, especially when channels are used to perform phase comparison, for example in modal analysis, power quality, torque vs. angle and related applications.

Several instruments have taken advantage of Hybrid ADC technology so far, the first being the SIRIUS XHS high-speed data acquisition system from Dewesoft.

Figure 3: An 8-channel DAQ system with hybrid ADC technology inside

Higher sampling rates create a demand for faster data transfer. USB 3.0 is used in these new systems, because it provides 10 times the data rate of USB 2.0.

Breakthroughs in one area often cause a cascade effect of technology advancements in related areas. For example, it would be self-defeating to use signal conditioners with lower bandwidths in front of an ADC with 15MS/s sampling and a 5MHz bandwidth. So, products incorporating hybrid ADC technology require upgraded signal conditioners for popular input types such as low voltage, high voltage, and IEPE accelerometers and microphones.

Applications that directly benefit from hybrid ADC technology include:

Electric motor power studies – the combination of high bandwidth inputs with high voltage and current signal conditioning is critical in this demanding application field. Ever increasing inverter frequencies require DAQ bandwidths in excess of 2MHz to adequately for acquisition and analysis. The better-than 24-bit vertical axis resolution makes possible detailed harmonic analysis that is not achievable with 16-bit systems. The rapidly-advancing technologies behind electric vehicles has made this field of study an imperative today.

Impact testing – impact tests are performed across a wide range of industries. For example, there are “drop shock test” applications for all kinds of products, large and small. Applications include vehicle crash testing, package and product life testing, and more. These tests involve one or more initial transient impulses followed by vibrations that need to be captured with the highest possible vertical axis resolution.

Explosion testing – There are ballistics and ordnance tests, which produce high-speed transients. High impulse signals are combined with seismic vibration data in these applications, taking full advantage of the ability to set some channels for maximum bandwidth at 16-bit resolution, and others for maximum dynamic range at 24-bit resolution or better.

All of these important tests benefit from the hybrid ADCs’ ability to simultaneously record very fast signals at the highest possible bandwidth, and slower signals with the highest possible dynamic range. This eliminates the need to use two different DAQ systems in parallel and then find a way to analyse and manage two sets of data afterwards.

Hybrid ADC technology is a huge step forward in the world of data acquisition. It combines the best capabilities of SAR and delta-sigma ADCs: ring-free high-speed sampling, very high dynamic range and anti-aliasing.