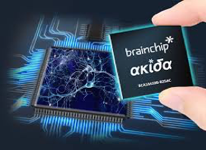 BrainChip Holdings, a small company listed on the Australian stock market, has disclosed the details of its neuromorphic system-on-a-chip (NSoC) chip called Akida, which will be ready for sampling late next year.

Its architecture mimics the biological processes of the brain, digitally. It contains data-to-spike converters, the ‘neuron’ fabric that does the computation and processing, some supervisory functions, I/Os for different type sensors, and more.

When signals arrive to the chip from sensors, be they analogue or digital, the architecture’s layer of converters transforms them into ‘spikes’ (hence, “spiking neural networks”, or SNNs), which then move forward through the network of logic gates (“hidden layer”). It is this progression of signals (spikes) through the network that makes it like that of the brain (or “neuromorphic”), and neither the traditional architectures (von Neumann, Harvard) nor convolutional neural networks (CNNs) work in the same manner.

As these spikes move through the neural network, they are then either re-enforced or inhibited, based on the way the network has been trained or evolved. Multiple spike streams are handled simultaneously and asynchronously, leading to high-level parallelism at low power. The low power consumption is due to the chip using standard CMOS technology, but also because spikes are fired off only when there’s change in information.

The BrainChip team claim this combination of low power and efficiency will make Akida appeal to sectors where number-crunching and trend-identifying are essential, such as in the financial business (parameter identification and analysis), automotive industry (object recognition and classification), and machine vision and cybersecurity, among others. However, the chip’s accuracy so far is around 82%.

The Akida NSoC is designed for use as a standalone embedded accelerator or as a co-processor. Its neuron model contains some methodologies for supervised and unsupervised training. In the supervised mode, the initial layers of the network train themselves autonomously, whereas in the final fully-connected layers, labels can be applied, enabling the neural network to function as a classification network.

The Akida Development Environment is available now. The chip will be out late next year, expected to cost around $10.