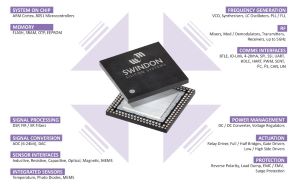 In 2020, the International Federation of Robotics calculated that three million industrial robots were operating in factories around the world. Each of these robots relies on numerous position sensors, which in turn depend on sophisticated ASICs.

“Position sensor” is a broad term covering a range of technologies. Here, we will consider sensors that measure rotation and linear displacement. For example, a rotary encoder might measure the angle of a robotic arm joint, whilst a linear encoder might report the position of a cartesian robot along a particular axis. In each case an encoder moves across a precisely manufactured scale, often graduated with sophisticated ‘redundant’ patterns.

The encoder includes a sensing element that converts a physical stimulus into a weak electronic signal. In an inductive encoder, this is a coil detecting a changing magnetic environment — say a slotted ferrous metal scale. In an optical encoder, the sensing element may be a phototransistor. Each type features excitation circuitry to create the stimulus, and a signal-conditioning circuit to amplify the weak electrical response. Most encoders then digitise the signal using an analogue-to-digital converter (ADC), with the digital output then passed on to a processing unit such as a CPU or a microcontroller that decides what to do with that signal. This CPU calculates position from the scale encoding, before serialising the output. It may also recognise events such as reference marks being passed, or overspeed conditions, generating immediate interrupts towards the host system. Interface electronics provide a bidirectional data path from the CPU to the host, and finally components that provide a stable power supply voltage.

When an encoder is first prototyped, these separate components appear as numerous off-the-shelf ICs, each typically supported by discrete capacitors and resistors. When production volumes are very low, and the design does not attempt class-leading performance, this may be the optimum solution. In most other cases, the cost of developing an ASIC is justified since developers can integrate as many functionalities as possible into a single package. The benefits of this can be dramatic.

Firstly, industrial robots serve as an example of an application where position sensors are expected to operate continuously; any maintenance downtime incurs cost and inconvenience. The solder joints of a circuit board are a common failure location, so it makes sense to reduce component count by replacing various discrete components and standard ICs with a single, highly-rugged package. In this way the electronics are afforded greater protection from environmental factors such as chemical attack and vibration, and assembly of the PCB becomes simpler.

In addition, the size of the PCB is reduced, leading to a smaller and lighter encoder that offers improved dynamics, and is able to serve new applications. Some customers also value the protection an ASIC affords for their circuit IP, as monolithically integrated circuits are far more difficult to reverse engineer than a collection of standard parts wired together in plain sight.

What’s more, an ASIC brings opportunity to reduce part cost. Systems built from off-the-shelf components are frequently over-engineered, as standard parts are designed and sold with maximum versatility in mind. Swindon will assess its customers’ systems and hunt out every opportunity to squeeze cost from the design: is that CPU really necessary, if we could synthesise hard-coded logic for a fraction of the price? Is that dual-channel ADC used to capacity? For high-volume products, the cost of the ASIC’s development is offset by a decimated bill of materials and simplified assembly.

Through ASIC design, customers can invest in performance where it matters. In position sensors this might be a non-linearity specification, equating to accuracy at different scale points. It could equally be an aggressive target on low-frequency noise, which cannot be easily averaged away. This is where working with an experienced ASIC partner yields benefits: the entire signal path can be optimised and simulated down to the finest detail, and proven IP and expertise can be deployed. For example, ‘chopping’ may mitigate troublesome flicker noise, or temperature measurement may be used to compensate for voltage reference drift. The best ASIC partners serve as consultants from the outset, understanding the system, recognising where the custom IC design unlocks improvements, and guiding the customer as they write a black-box specification.

The process of ASIC development

A company should consider whether a project is ready to benefit from a custom ASIC as soon as a prototype exists. At this point, a supplier like Swindon will assess whether a custom solution is for them, and identify the best possible system partitioning. It is common, but not always necessary, for a supplier to undertake a four- to eight-week feasibility study to inform these conclusions and arrive at a detailed proposition and costing. The supplier will then develop the chip, breaking the design down into analogue and digital blocks. At this stage, many customers benefit from receiving a detailed behavioural model, in VHDL for example, to allow co-simulation with the rest of their system.

Beyond this, the work is firmly in the supplier’s hands, and no more resource is required from the customer, beyond periodic reviews to demonstrate the growing maturity of the design and its verification. The timescale of the entire process from specification to silicon will depend on the complexity. But in every case, it is essential to work with an ASIC supplier who can own all aspects of the project, from the initial consultancy to the ongoing supply of qualified production parts.

Position sensors underpin modern industry and continue to evolve in their performance and technology. The sensor electronics are a key part of this evolution, having direct influence on speed, accuracy and overall form-factor. Whilst off-the-shelf components suit some applications, manufacturers looking to truly differentiate their products must take the next step and explore the benefits offered by a custom IC.