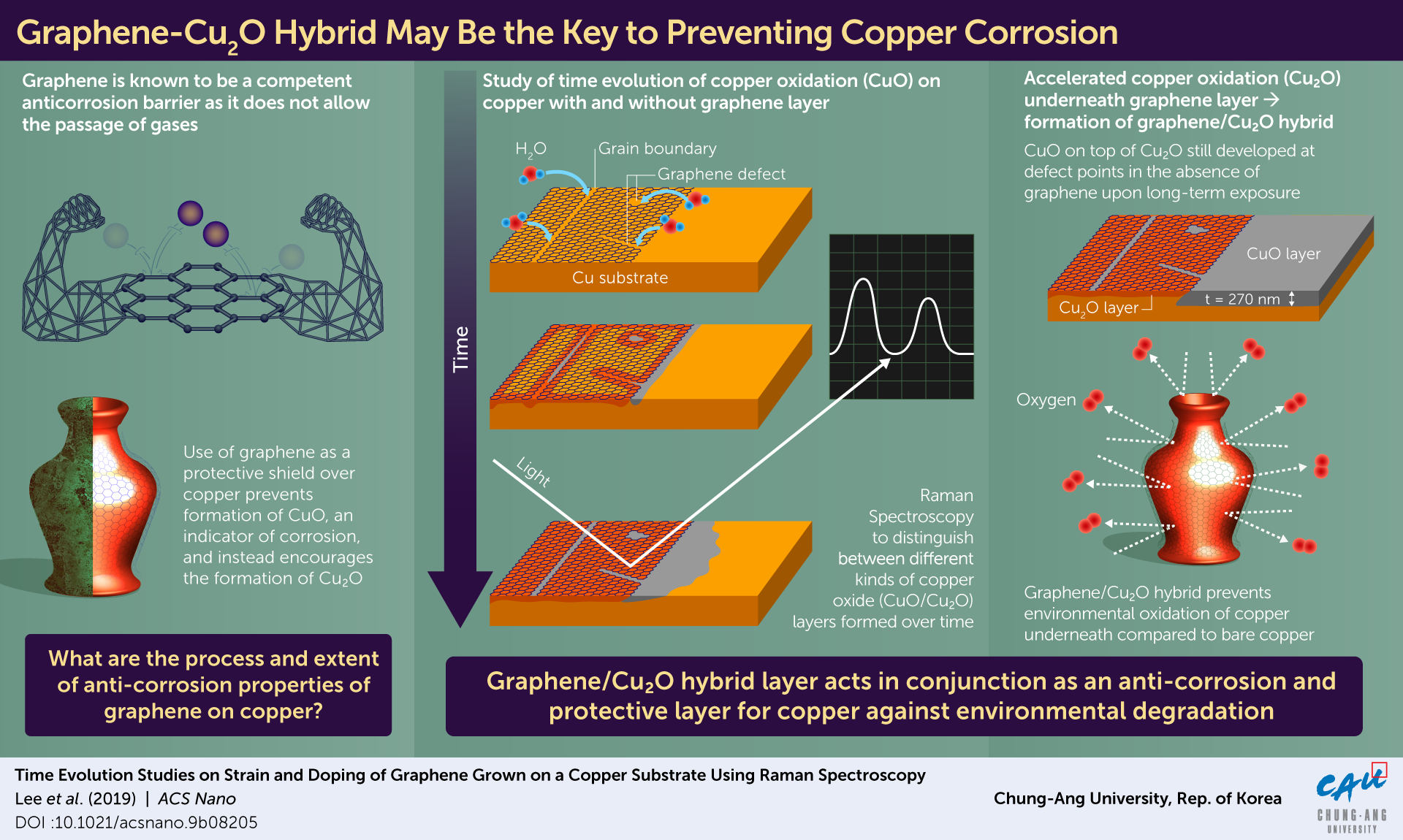 Scientists in Korea are first to observe an unprecedented way in which graphene forms a hybrid layer that prevents copper corrosion.

A research team from Chung-Ang University used Raman spectroscopy to analyse graphene’s properties over a long period and found that the corroded surface of copper forms a hybrid layer with graphene, which prevents further corrosion. These findings could have potential applications in extending the life of copper – a common component of various electronic devices.

Copper is widely used in electronic devices that require wiring. But, a challenge with using copper is that its surface oxidises over time, even under ambient conditions, ultimately leading to its corrosion. Hence, finding a long-term method to protect the exposed surfaces of copper is a valuable achievement.

One common way of protecting metal surfaces is by coating them with anti-corrosive substances. Graphene is studied extensively as a candidate for anti-corrosive coating, as it serves as a barrier to gas molecules. But, despite these properties, graphene sheets are seen to protect copper from corrosion only over short periods (less than 24 hours). Surprisingly, after this initial period, graphene appears to increase the rate of copper corrosion, which is completely in contrast to its anti-corrosive nature.

To shed light on the peculiar nature of graphene seen in copper, the research team, led by Prof Hyungbin Son, studied graphene islands on a copper substrate to analyse the patterns of its corrosion.

“Graphene is known to be mechanically very strong and impermeable to all gases, including hydrogen. Following studies claiming that the corrosion of copper substrates was accelerated under graphene through various defects, these properties have attracted great attention as an oxidation barrier for metals and have been controversial for over a decade. However, they have not been qualitatively investigated over longer time scales. Thus, we were motivated to study the role of graphene as a corrosion-resistant film at the graphene-copper interface,” said Prof Son.

After 13 days of exposure to ambient conditions, the team observed that that the corrosion had significantly slowed down where a new hybrid of graphene and Cu2O layer had formed. Meanwhile, the unprotected copper continued to corrode at a consistent rate, until it had penetrated far deeper than the corrosion under the graphene shield.

These findings show that graphene, in fact, protects copper from deep, penetrating oxidation, unlike what previous studies had concluded.

“We observed that over a longer time scale (more than 1 year), the graphene-Cu2O hybrid structure became a protective layer against oxidation. The area beyond the graphene was heavily oxidized with CuO, with a depth of ∼270 nm,” said Prof Son,

This study has finally managed to settle the debate on whether graphene can be used to protect copper against oxidation.

“Graphene’s anti-corrosive properties have been controversial for nearly a decade, with many studies suggesting that it accelerates the oxidation of copper, resulting in its corrosion,” said Prof Son.