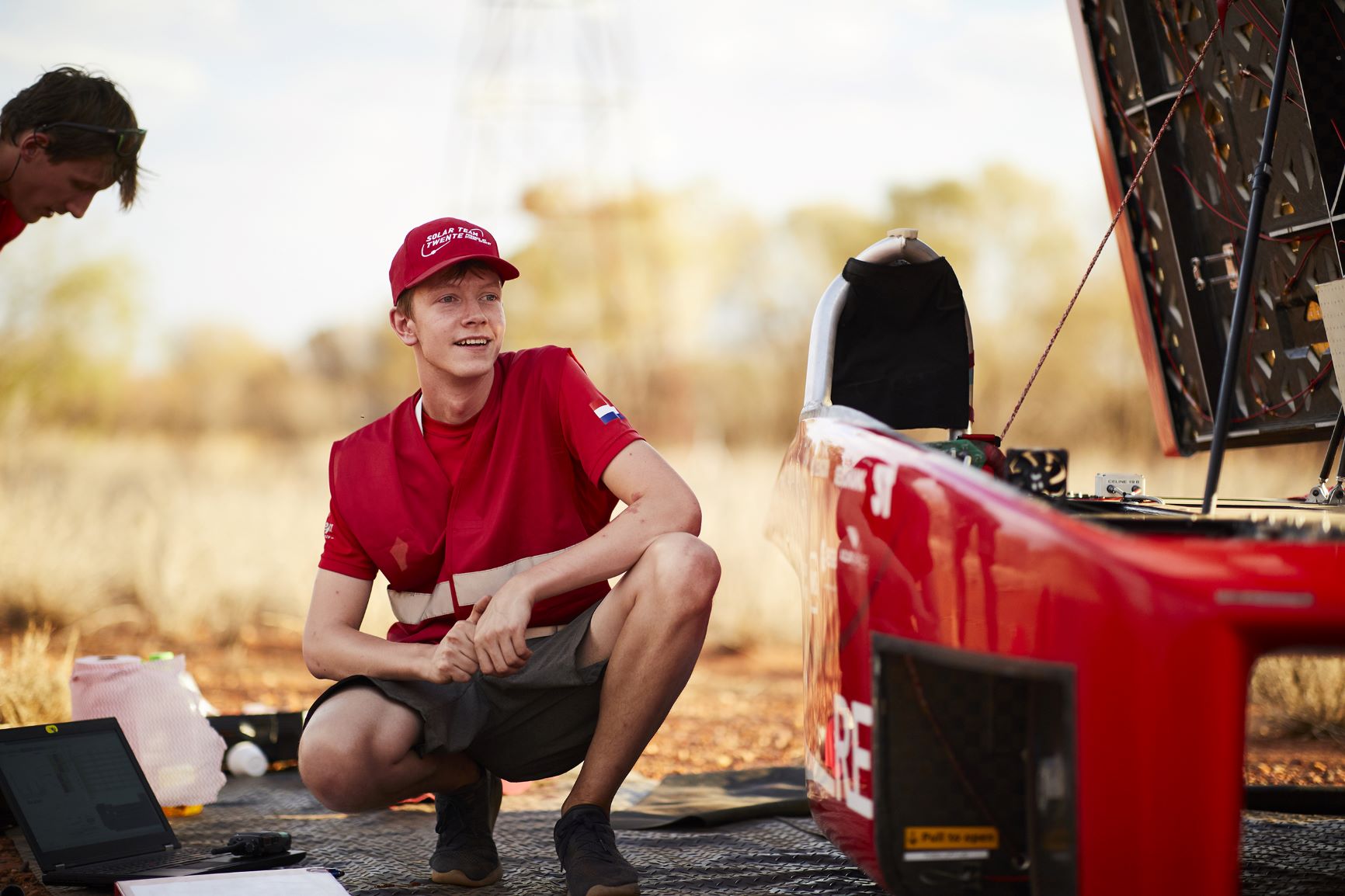 Q:        Is there one race of solar-powered cars that you would not miss?

A:        The ultimate challenge for pure solar-powered race cars is the biennial Bridgestone World Solar Challenge, on a 3,000km route from Darwin in the north of Australia to Adelaide in the south. Teams of engineers and drivers compete to finish the race in the shortest possible time, in specially-designed cars that have only one power source: sunlight!

Q:        How do you ensure you stay ahead of the competition in the race?

A:        To win the World Solar Challenge, a race car must generate as much solar energy as possible, and convert the electricity it generates as efficiently as possible into mechanical power delivered to the wheels. At the same time, it must keep energy losses to a minimum: race teams pay minute attention to aerodynamic design to keep wind resistance to a minimum.

The basic design of all cars in the race is similar: an aerodynamic wing shape covered in arrays of photovoltaic panels to convert the sun’s light into electric power, which is fed directly to a motor driving the wheels, with any excess stored in a small on-board battery.

The most highly-placed teams are those that can best optimise the various elements of the car’s design – the aerodynamics, the power generation system, the motor and the traction system. Race strategy also plays an important part: the driver must move as fast as possible, but not so fast that the car’s battery runs out of power when the car is not in bright sunlight.

A:        Solar Team Twente has been using self-developed motors in its cars since 2013, which have been surpassing the efficiency of off-the-shelf models. For the 2019 World Solar Challenge, the team decided to seek an additional performance advantage by also abandoning the use of commercial inverters, which are used by most of our competitors, and to design a more robust and efficient version from scratch ourselves.

The team’s race strategy also called for precise regulation of the battery’s state-of-charge. Every team’s goal is to finish the race with zero energy left in the battery, to maximise total energy usage and thus achieve the highest possible speed for the longest possible distance without running out of power. The more accurate the state-of-charge measurement, the more confidently the race team can set the optimum speed of the car’s cruise control, taking into account the weather, battery capacity, competitors performance, and other factors.

Q:        What are the most important parts of the solar-powered race car?

A:        There are four important electrical systems in a solar race car: the array of solar panel generators; the battery and its battery management system; the inverter (motor drive), which converts the solar panels’ direct current output to a three-phase alternating current drawn by the motor; and the motor itself.

The car’s designers aim for better than 99% efficiency in the various electrical power conversion circuits. We were looking for that extra 1% efficiency to give us an edge over other race cars. When you are already at efficiency better than 95%, eliminating any remaining losses is really hard to do. You have to be able to look at the tiny deviations in voltage or current in great detail, which requires an accurate and sensitive power measurement system.

The same requirement for measurement accuracy applies to the battery management system: even tenths of a percentage point of extra accuracy in state-of-charge measurement can make a difference between winning and losing.

A:        RED E’s engineering design team needed to repeatedly perform power (concurrent voltage/current) measurements to measure the efficiency of the motor system under various operating conditions. The development process involved multiple iterations of the system design, each one validated to assess the effect on efficiency. The benchmark for the team’s design was the off-the-shelf motor that it, and other teams, had used previously.

To validate the accuracy of the fuel gauge, the car’s on-board sensor measures the battery’s state of charge, the current flowing into the battery (from the solar panels) and flowing out of it to the motor. By subtracting output from input, it can calculate the residual charge in the battery. This required extremely accurate continuous measurement of current flows.

We also have to measure the power output of the motor system, including the inverter and the motor itself, at a range of power input values, to refine the design and incrementally improve its efficiency. This called for extremely accurate power analysis at a high sampling frequency.

To achieve the accuracy and precision required for system design and validation, the RED E team chose the WT5000 Power Analyser from Yokogawa.

A:        The current-sensing circuit we had previously used was already better than 99% accuracy, but we were looking for better than that – it was only when we analysed the sensor with the WT5000 that we were able to compensate for the offset in the current sensor, and so configure the measurement outputs to achieve optimal accuracy. That crucial extra confidence in our state-of-charge measurements can give the driver a vital extra 1-2km range at a given speed that we would not otherwise have been sure of getting from the battery.

The WT5000 is a very nice instrument to use, it’s intuitive and easy to navigate around the controls. It’s also easy to tweak the display so that it shows exactly the measurement outputs you are interested in, like when it clearly demonstrated that our new inverter design outperformed the equivalent off-the-shelf model by a significant margin.

A:        We are currently very busy with getting together a new team of 20 enthusiastic students to once again build the world’s most efficient solar-powered car. Of course in the background, we are still keeping a close eye on all developments in the industry to be able to give the new team a kickstart as soon as they start in September of this year. The beginning of a new team automatically results in my team attaining the title of “old team member”. In which case will we do our very best to support the new team through the same processes we went through, and together push Solar Team Twente further as a whole. We will aim to build the best possible solar car once again. There will be focus on improving our custom motor controller even further but a lot of our developments are also dependent on the regulations of the challenge. Which have not been released yet.