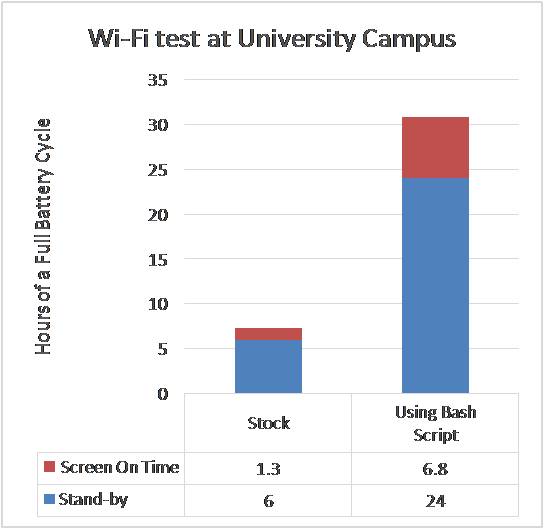 Android is a very popular operating system (OS), and because of its effectiveness, performance and practicality, it is widely used in mobile and portable devices. However, its popularity has also brought it a drawback in the form of poor optimisation since some vendors do not build it but port it from stock, such as Android Google sources. Often, this results in the hardware’s lower performance and poor power efficiency.

Optimising an operating system consist of re-writing or modifying the main source code, whilst taking into consideration each system’s unique set of parameters. With Android, using the source code is not entirely possible in most cases, since many companies that provide Android devices keep their systems closed. Still, most of these systems are built using the main source code.

Having prior knowledge of the OS and its modifications helps further optimise it, by providing direct solutions to challenges encountered on any device built on it. This sort of re-optimisation can be carried out without having to decompile the original sources of the Android OS, and also it can be done at the user’s end.

Improving the power efficiency of the Android platform is one of the most active research areas in Android system development. Different research studies have been carried out on existing techniques to improve battery efficiency without compromising user experience, including ways of lowering screen brightness, switching pixels, increasing Screen-On Time (SOT), using alternative applications that do same work with less resources, and others.

Google introduced a method that provides a better battery efficiency by restricting app access to network- and CPU-intensive services. Also, there’s a method of increasing battery efficiency by determining and monitoring device connectivity status; for example, if not connected to the Internet, the device will not need a scheduled update either.

During design, first we need to establish the main areas that affect the system’s optimisation and efficiency, including:

User applications and services consume power, since they constantly use background processing (CPU, GPU, etc.), synchronisation, data transfer to and from the Internet and communications protocols among others. App hibernation helps increase device efficiency to over 75%; however, it’s best that hibernation entirely stops the app’s background processes, with only a gap or a wakeup timer for device wake-up; this gap can work as a periodic CPU wake-up timer for the app. Table 1 shows battery usage in different operating modes.

Another way to improve app efficiency is by automating its tasks. We used Tasker for a test case, with which we automated several apps that normally run all the time in the background. The goal was to place these applications in hibernation mode as soon as the user turns off the screen. Once the screen comes back on, the applications start to run again.

After testing the automation of the most-used applications like WhatsApp, Facebook, Twitter, etc., on the display state task for 24 hours, the automation saved over 25% of standby time without compromising user experience.

Improved memory management also optimises the system, which affects both performance and battery use. We tested something called ‘Swappiness’ on the memory to ascertain how it may increase battery consumption rate, considering the size of the RAM (Random Access Memory). Swappiness is a property of the Linux kernel that changes the balance between swapping out runtime memory, as opposed to dropping pages from the system page cache. Swappiness can be set to values between 0 and 100; a low value means the kernel will avoid swapping as long as possible, whereas a higher value will make the kernel work harder to use swap space.

We set Swappiness to 60 to start with, which keeps the swap in an on-state whenever the RAM is 35-40% used. This results in a slower task operation, which decreases efficiency.

In a follow-up test, we reduced the Swappiness value to 25 on a 3GB RAM device, which makes the swap work only after 70-75% of RAM is used:

Above, the ‘/proc/sys/vm/swappiness’ parameter sets the value that balances between dropping pages from page cache and the swapping-process memory.

Wi-Fi is one of the most common reasons for low battery performance. The constant usage of the Wi-Fi service relies on Wi-Fi wakelocks, which keep the devices awake for app access, preventing it from going into deep sleep, and hence causing rapid battery-drain. It’s most effective to run the Wi-Fi service when needed, which will reduce the wakelock service by over 80%.

We can modify the SQlite database of the device settings parameter ‘Android ID’ located in the ‘/data/data/com.android.providers.settings/databases/settings.db’ by using the Bash (Unix shell) language:

‘Wifi_idle_ms’ is a parameter that controls Wi-Fi idle time for the default sleep policy from the Android Open Source Project. This script allows to set the value of ‘wifi_idle_ms’ to a specific time. Once the screen is turned off, Wi-Fi remains connected for 60 seconds before it turns off; 60 seconds is the value we assigned to the variable ‘wifi_idle_wait’. Once the screen is on, Wi-Fi automatically reconnects. This resolves most wakelock issues related to Wi-Fi. As an alternative solution to network connection loss, when the screen is off, the device can automatically connect to data connection of the SIM card, turning off Wi-Fi.

We conducted a worst-case scenario test on a device running on the Android platform 5.1.1, connected to a public Wi-Fi access point, a public university campus where many people use the service, which lowers the connection quality. We conducted the test over two days; see Table 2.

In Figure 4, ‘wlan_rx_wake’ was awake 85% of the time during the last five hours (after unplugging the charger), leaving the battery with 54% capacity.

In Figure 5, after using the script to put the Wi-Fi to sleep (60 seconds after turning the screen off), the ‘wakelock_rx_wake’ was awake for only 50 minutes and 49 seconds, which is 8% of the time, leaving the battery with 80% capacity after 10 hours and 55 minutes following unplugging the charger.

We repeated the test in a residential house with Wi-Fi access point; see Table 3.

The standby time was enhanced by 55.26%, while screen usage was almost the same, in a full battery cycle, due to the absence of Wi-Fi connectivity in the background when the screen was off or in standby.

The Bluetooth service is also one of the most common power users. The service usually handles data transfer or pairing with another device. Since most users forget to toggle off the Bluetooth service after using it, this results in a significant battery drain.

In some cases, we were unable to trigger the Bluetooth toggle through Tasker alone, so we created an alternative solution. Using Android Open Source Code for Bluetooth and Bluetooth Adapter, we wrote a simple Bluetooth application in the Java programming language with API level 5, with which the Bluetooth service can then be toggled off through Tasker or any other automation app:

This solution saves a lot of power lost to useless connections of the Bluetooth service, and improves overall system efficiency.

We then tested the solution. Results showed that a high number of Bluetooth wakelocks were present when the toggle was on, even though Bluetooth was not in use; see Figure 8. Figure 9 shows the level of wakelocks present when the device was in standby, and how deep sleep was interrupted by them. This resulted in a stressful power drain from 85% down to 77% in 6.5 hours in standby. Figure 10 shows the low level of wakelocks on the same device after turning off the Bluetooth toggle, which resulted in a power drain of 96% to 95% in a seven-hour standby state.

Fig. 9 Bluetooth connected and not paired

We developed a kernel optimisation routine based on Samsung Sources for Exynos 5433, which has shown a significant improvement regarding power efficiency. One of the most significant changes that helped saving power was introducing a WQ_POWER_EFFICIENT flag. Adding the flag as a system-wide workqueue reduced standby battery drain and improved deep sleep. Furthermore, we reduced the ‘wakelock_rx and wakelock_ctrl’ wakelocks of Broadcom Dongle Host Driver from Android Open Source by adding a variable and dividing it by the original value of the wakelocks’ timeout:

The same concept can also be applied on other wakelocks.

For a proximity sensor:

For a temperature sensor:

Wakelocks timeout can be decreased to achieve higher power efficiency without affecting user experience. For instance, setting the value of wl_divide = 4 will give 1/4th of the timeout for the Wi-Fi wakelocks. Other wakelocks like GPS and sensor wakelocks can also be optimised by giving a smaller window gap at which the wakelock do checks. This significantly improves power efficiency when using these services.

Figure 11: Before using WQ_POWER_EFFICIENT flag and reducing wakelocks by kernel

Fig.12 After using WQ_POWER_EFFICIENT flag and reducing wakelocks by kernel

In Figure 11, when the device was in off-charger state (unplugged), the battery’s full cycle was 11 hours, with 2.5 hours Screen-On-Time. Wakelocks are shown active in many time intervals of ‘Awake’ when the screen was off, which affected the deep-sleep state and kept the device active.

In Figure 12, when the device was in off-charger state (unplugged), the battery’s full cycle was one day, 10 hours and 49 minutes, with 3.83 hours Screen-On-Time. This significant improvement in power efficiency proves how kernel optimisation plays a major role when creating an efficient power system.

These methods were developed to be interactive and flexible for the developer and user alike, which progressively defines the best way to overcome low efficiency issues on any Android platform. These methods can be applied to any Android system, in particular Lollipop 5.1.1 and previous versions.

The tests we carried out show that for common problems that affect device performance, an exact solution is found that can fine-tune both performance and battery consumption. As to effectiveness, these methods were tested by an Android development testing team, who judged the overall result to be practical and efficient. Most of the differences in general raw performance we re-evaluated as improvements over the stock system.

In general, the trade-off between the power efficiency and the stability of the re-optimised system is always very good. For these reasons, these optimisation methods could be a very convenient and powerful add-on to existing software for Android development.