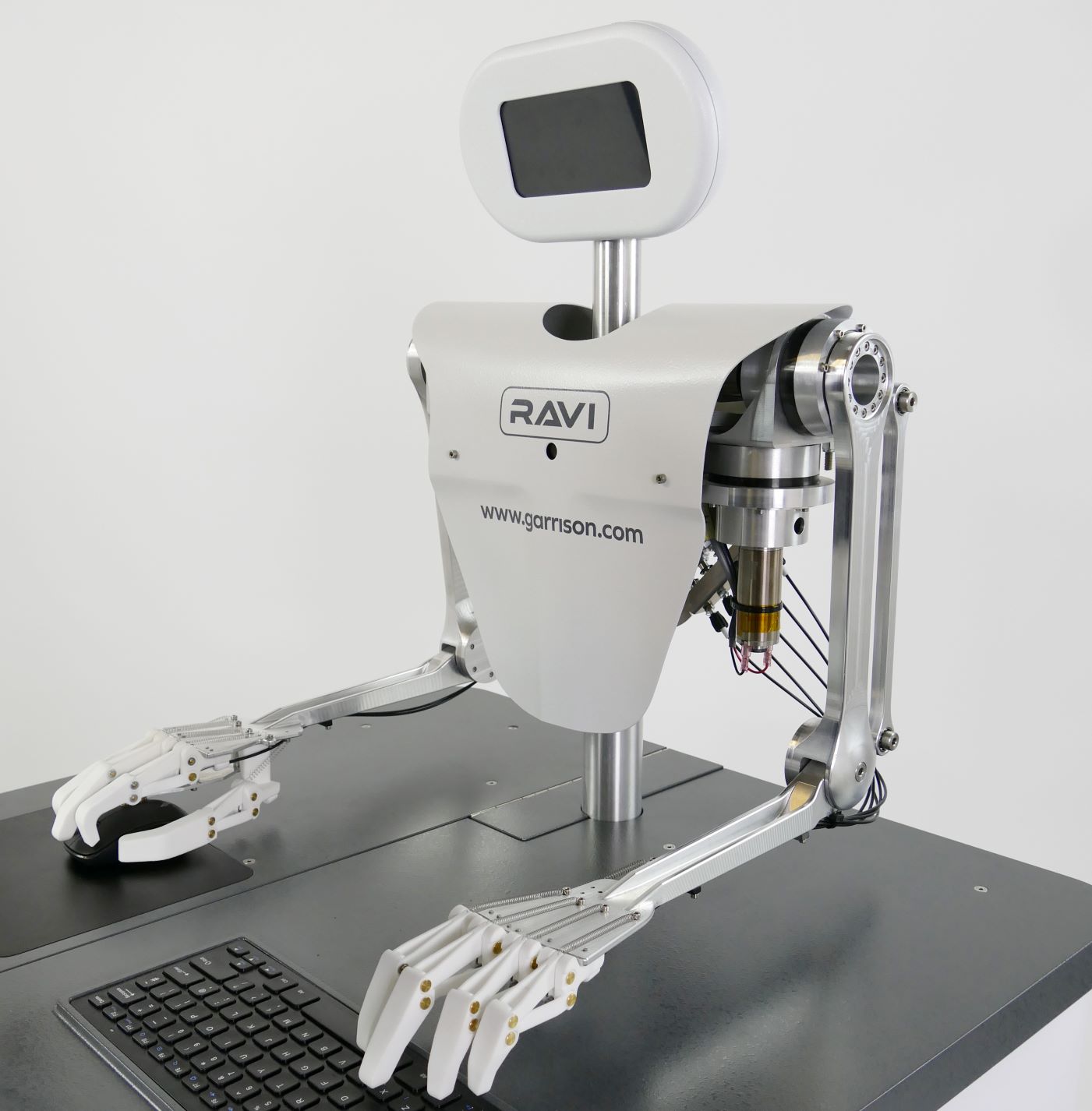 IDC (Industrial Design Consultancy), a product design company, developed RAVI 2, a travel version robot that can be taken out to events and exhibitions. RAVI 2 follows the ‘original’ robot, RAVI, developed by IDC last year for internet security experts Garrison. This was the first robot to type at a computer using fingers like a human. It was used to demonstrate Garrison’s complex cyber security software in a visual and clear way.  It was such a huge success with visiting clients that Garrison commissioned IDC to develop RAVI 2.

IDC was briefed to keep the original humanoid qualities of the robot and functional features, but Garrison wanted a solution for events, from transport to actual presentation at an exhibition stand.  RAVI 1 was a fixed demo unit, so IDC’s team needed to redesign the structure of the robot while devising a sleek solution for presenting at shows.

A key part of the design was reengineering the robot to become a transportable package.  IDC’s mechanical engineers came up with a solution that used a folding design for the robot, enabling the robot to be conveniently packaged away in a robust unit for transport.  This used a winding mechanism with a worm gear mounted on a precision-engineered rotating column so the robot could be hand-wound out of the unit.  This was engineered to allow for the forces of movement, but also provided total stability when the robot was upright.  The head was designed to be detachable and was simple to fit once the body was in position.

The unit which contained the robot for transport, converted into a display stand for the robot to sit on for presentations, with a table top and computer screen folding into place from within the unit.  The finishing touch was a graphics wrap with Garrison branding to encase the unit and turn it into a display feature in its own right.  IDC’s team used an aluminium extrusion framed boxing system which sat on wheels and was both robust and easy to transport.

One of the most challenging parts of the original development was ensuring the correct forces through the gears and motors to ensure the robot typed at the right speed.  Engineering analysis was a key part of this process.  RAVI could have typed at twice the speed necessary, so fine-tuning the mechanism was required to slow the typing to the right speed. To ensure safety in all eventualities, the team created five different safety solutions with physical stops and sensors to detect changes in speed, positioning and power.  The RAVI 2 system included a clear ‘stop’ button on the presentation stand in case of an emergency.

The team was also able to bring further benefits to the design, including an improved head design that was able to rotate instead of being fixed, as with RAVI 1.  Further refinements were made to finger components to improve ease of assembly and make reliability even better.  The 3D print materials used in the finger components were also upgraded to make them more aesthetically pleasing.

“Once again, the team has shown how diverse our engineering and design skills are to not only develop, but build the robot using precision engineered components created by our prototyping team.  Robotics are featuring across many of our projects currently, from industrial to medical projects and we are always thrilled to delight customers with our developments,” said IDC Director, Simon Collings, who managed the RAVI projects.