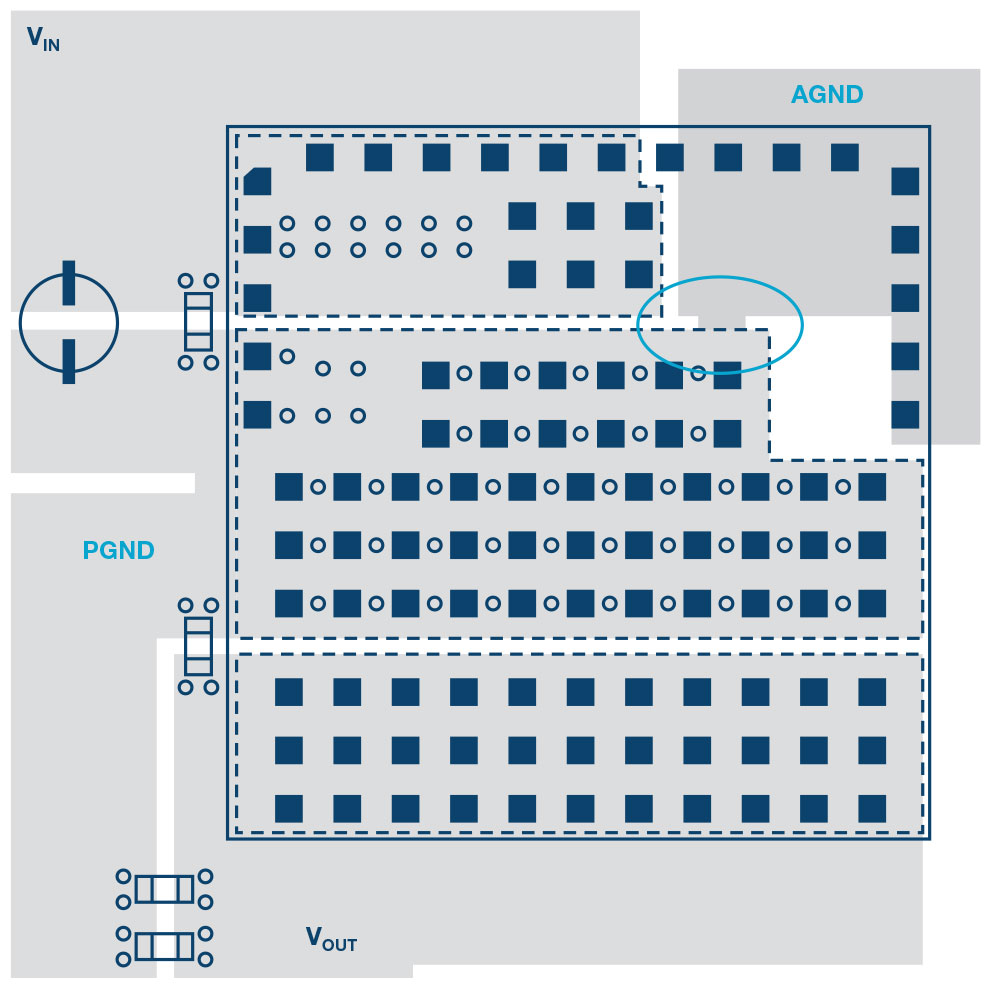 Where do I connect the grounds of switching regulators?

How should you proceed with a switching regulator with an analogue ground (AGND) and a power ground (PGND)? This is a question asked by many developers designing a switching power supply. Some developers are accustomed to dealing with a digital GND and an analogue GND; however, their experience frequently fails them when it comes to the power GND. Designers then often copy the board layout for a selected switching regulator and stop thinking about the problem.

PGND is the ground connection over which higher pulsed currents flow. Depending on the switching regulator topology, this means the currents through a power transistor or the pulsed currents of a power driver stage. This is especially relevant in switching controllers, for example, with external power switches.

AGND, sometimes called SGND (signal ground), is the ground connection that the other, usually very calm, signals use as a reference. This includes the internal voltage reference needed for the regulation of the output voltage. Soft-start and enable voltages are also referenced to the AGND connection.

There are two different technical approaches, and thus different opinions among experts regarding the handling of these two ground connections.

All of the circuit’s ground connections and a possible ground plane would be linked to this common point in a star topology. Figure 1 shows an example implementing this approach. The board layout for an LTM4600 is shown, a 10A step-down micromodule. The separate ground connections on the board are joined right next to each other (blue oval in Figure 1).

Due to the parasitic inductance of the respective bonding wires between silicon and the housing, as well as the inductances of the respective pins, there is already a certain amount of decoupling of PGND and AGND, resulting in a low level of mutual interference between the circuits on the silicon.

Figure 1. Local connection of PGND and AGND right at the solder contacts

The other approach involves additional separation of AGND and PGND on the board into two separate ground planes connected to each other at one point. Through this connection, interfering signals (voltage offset) remain largely in the PGND region, while the voltage in the AGND region remains very calm and decoupled very well from PGND. However, the disadvantage is that, depending on the transients in the pulsed currents and the current intensities, there may be a significant voltage offset between PGND and AGND at the respective pins. This can lead to improper functioning of, or even damage to, a switching regulator IC.

Figure 2 shows an implementation of this approach. This comes from an ADP2386, a 6A step-down switching regulator.

Figure 2. Separated AGND and PGND connected under the GND tab by vias

The grounding question comes down to a trade-off between strong separation with the advantage of separating noise and disturbances, and running the risk of generating voltage offsets between the two grounds and thus causing harm to silicon and compromising functionality. The right decision to make in regard to this trade-off is heavily based on the IC design, including switching transition speeds, power levels, parasitic inductances on bonding wires and IC package, and the latch-up risk of each IC design involving the individual semiconductor process.

The answer to the question of how to deal with the grounds AGND and PGND is not that simple. That’s why this discussion continues. At the beginning, I mentioned that many users of switching regulators adopt the board layout and the ground connection type from the example circuit supplied by the IC manufacturer. This procedure is useful because you can usually assume that the manufacturer also tested the respective IC in this configuration. It can also be seen in the examples given in Figure 1 and Figure 2 that the respective IC pinout is suitable for local ground connection close to PGND and AGND, or for separate grounding.

Of course, an IC manufacturer may make mistakes when designing example circuits. That’s why it’s good to have some further information about the underlying approaches.