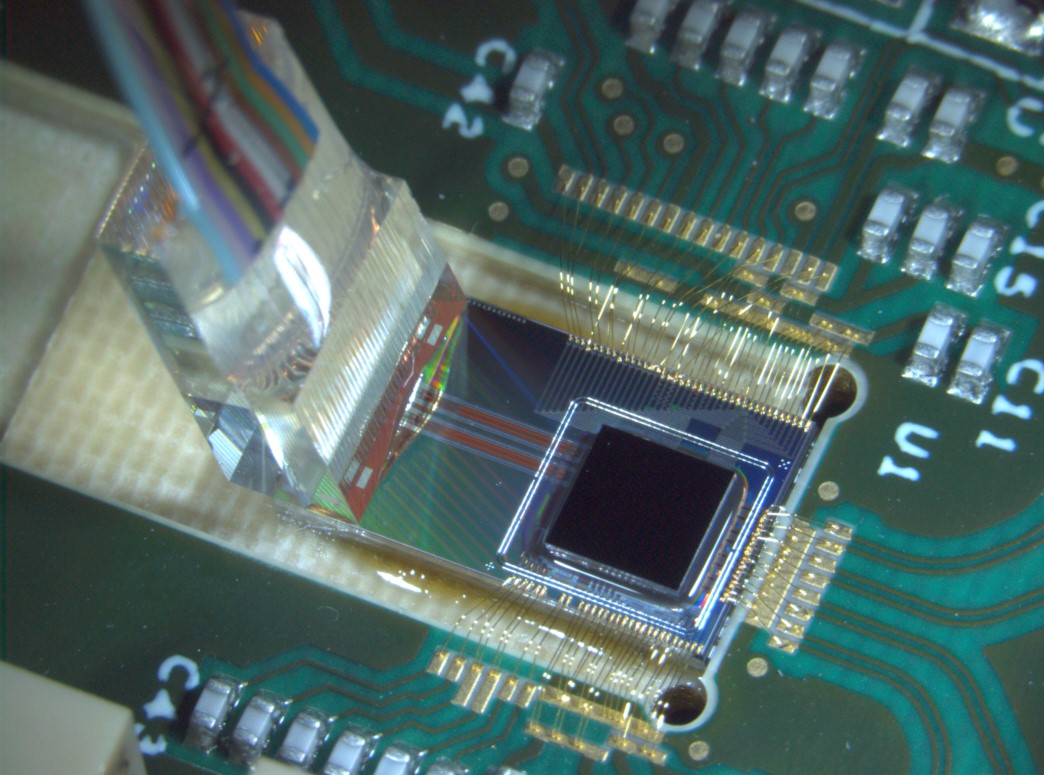 CEA-Leti has developed a silicon-photonics-based transceiver for data transfer rates up to 100Gb/s per fibre at a low-power-consumption. The module multiplexes two wavelengths at 50Gb/s and is designed to meet the ever-increasing data-communication demands and energy use of data centers and supercomputers.

The EU H2020 project, COSMICC, further developed all the required building blocks for a transmission rate of 200Gb/s and beyond without temperature control with four 50Gb/s wavelengths and by aggregating a large number of fibres. The key breakthroughs are the development of broadband and temperature-insensitive silicon nitride (SiN) multiplexing components on silicon (Si), the integration of hybrid III-V/Si lasers on the Si/SiN chips and a new high-count adiabatic fiber-coupling technique via SiN and polymer waveguides.

This demonstration opens the way to technology that allows a reduction in the cost, the power consumption and the packaging complexity and opens the way to reaching a very high aggregated data rate beyond terabits per second (Tb/s).

Starting with STMicroelectronics’ silicon photonics integration platform, the COSMICC project developed a coarse wavelength division multiplexing (CWDM) silicon-photonics transceiver in a packaged module at 100 Gb/s per fiber. It is scalable to 400 Gb/s and includes 3D assembly of a silicon photonic chip and its electronic control chip. The silicon photonic chip integrated high-performance 50 Gb/s NRZ optical modulators and photodetectors, and a two-channel CWDM multiplexer and demultiplexer. The control electronics was optimized to minimize energy consumption down to 5.7pJ/bit per channel at 50Gb/s data rate.

Separately, a library of enabling building blocks for higher data-rate datacenter interconnects was built on a SiN-enhanced silicon photonics platform, including new broadband and athermal SiN components and hybrid III-V/Si lasers. SiN, which is 10 times less sensitive to temperature than silicon, will dramatically reduce the transceiver cost and power consumption by eliminating the need for temperature control and will thus contribute to the reduction of the heat output and cooling costs of mega datacenters.

CEA-Leti scientist Ségolène Olivier, who coordinated the EU project, said development of modulators and photodetectors at 50 Gb/s and their co-integration with their control electronics was a breakthrough that led to the low-power consumption 100 Gb/s transceiver module.

“In addition, the new building blocks are essential for addressing the need for terabit-per-second transceivers at low cost and low energy consumption to sustain the exponential growth of data traffic in datacenters and in high performance computing systems,” she explained.